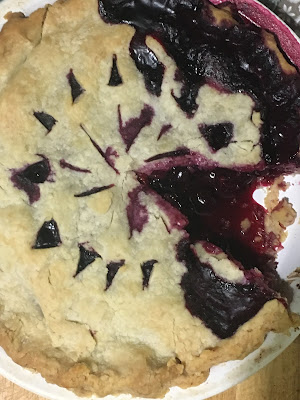 In baking, like everything else in life, weather, moods and trips to the store dictate whether pie is in order. I'm that person who sees pies in grocery store cases and thinks: what a shame, why don't people bake their own pies anymore? Then crave pie all the way home. It's been humid and unbearable one day, dry and breezy the next so far this summer with very little rain.
Hot days of summer or not--I was baking a pie this week.

I don't know why I've always felt baking a pie is an all day affair. It never is. Pie memories I have are of a pastry cutter and my mother with a large bowl of flour and clumps of butter rolling about in pieces, seeping through the thin wires of the cutter, and of me asking for raw bits of dough to nibble on while she continues to roll through the process of butter, dough, shortening. Then her with a large wooden rolling pin (the same one I still use today), shaping a circle out onto the kitchen counter with a few flings of flour tossed over and under the dough before being carefully flattened into the vintage Corning Ware blue cornflower pie plate (the exact same pie plate I use to today). Then she'd take gobs of whatever fresh fruit was available at the store for filling and copious amounts of sugar. Peach pies more often than not, but for me--berries always in summer. It never seemed to be a big deal for her to just magically throw together a pie.
The pies were always scrumptious. 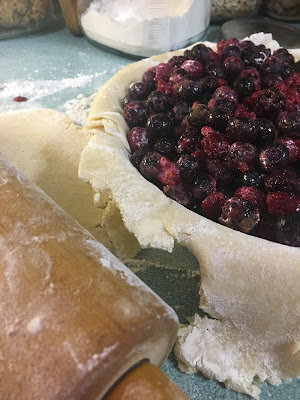 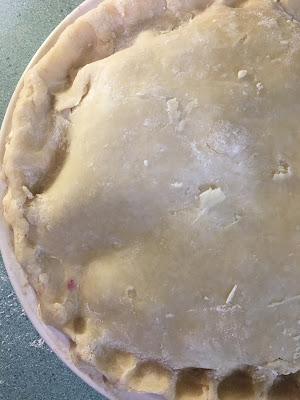 There are a few schools of thought out there as to whether pie crust is a butter only affair or a shortening AND butter affair. I am of the latter in terms of preference.
Nothing fancy. Use whatever design you'd like to vent the pie during baking. 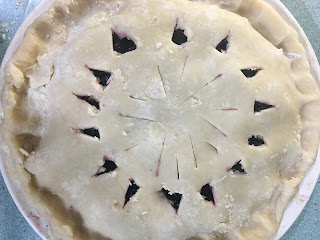 Giving into my craving for pie the entire pie process comes together and bakes in about an hour and a half. The "half hour" set aside for mandatory cooling period for the dough. Eating of said pie commences after a good hour or two of cooling with a dallop of vegan vanilla ice cream: a la mode. Or saved for the next morning. . . for breakfast. (The best way to eat pie if you ask me.)
This is actually my second berry pie I've baked in two days.

And aside from pies: here's the newest member of the family.
This is our last addition to the family what with all the aging we have left in front of us . . we are now two dogs, two humans and four hearts. She is a little under weight and has much growing to go. She is super smart. Her sister loves her, but is a bit too big to have "full access" for play time (because her paw literally covers the little one's head entirely). Supervised play only for the time being.
She fell asleep on the exam table at her first vet appointment while getting her booster shots.
Awww. 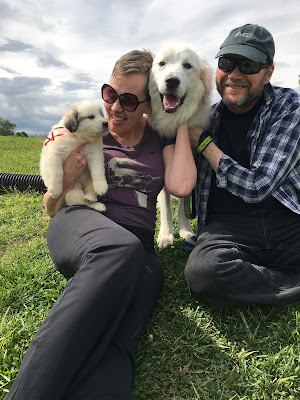 The first day we ALL met her! Smallest. Sweetest. Big Sissy loves her, too. 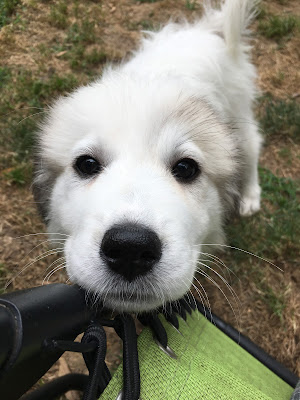 Now.
Yup. It's a whole new world around here.

In a large bowl, sift together the flour and salt. Then cube the ice cold butter and shortening and using a pastry blender, work the dough until the butter and shortening are in small pieces--some larger pieces are okay--actually are fine! Then begin adding the water one tablespoon at a time, tossing the dough around with a spoon to incorporate the water. Begin to work the dough into a ball carefully with your hand--but don't "over handle" the dough--you want to be able to form a ball. Then divide the ball in half. Flatten each half into a disc, then wrap in plastic and place in fridge for 30-45 minutes.

6-7 cups frozen blueberries (*I only had four cups of blueberries on hand, so added frozen black and red raspberries to offset the amount--it works out fine--but I did buy more blueberries for next time)
1/4 t. ground cinnamon
2 T. corn starch
2 T. all purpose flour
1/2 cup sugar
juice of whole lemon

Preheat oven to 425. Prepare a 9" pie plate for baking. Toss all filling ingredients together in a bowl. Roll out pie dough on well-floured surface to a 10" in diameter circle--or wide enough to cover the base of the pie plate with a bit of overhang. Place dough in pie plate, pressing it in to fit bottom and come up the sides. *You don't want the crust too thin--about a 1/4" works well. Add the filling. Repeat with other half of dough and then place on top of filling. Fold the dough around the edges under and using your finger and thumb, pinch the crust closed. For the top of the pie, use whatever "venting" system you'd like. I just used a knife and cut out my own decorations, well. . . triangles.

Bake for 20 minutes at 425. Then turn oven down to 350 and bake for an additional 40 minutes or until crust begins to brown.

Allow to pie to cool for at least an hour before slicing. Store in fridge. 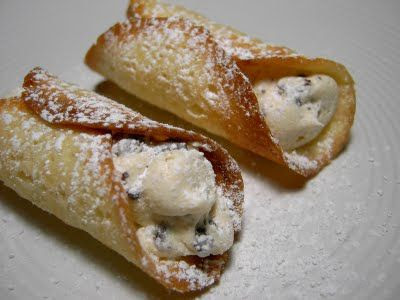 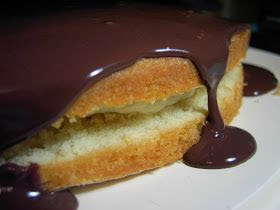 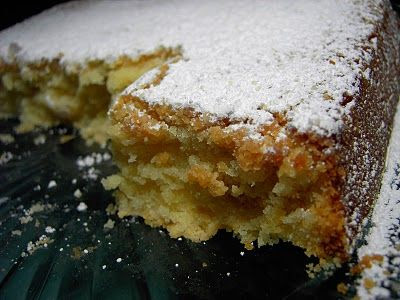